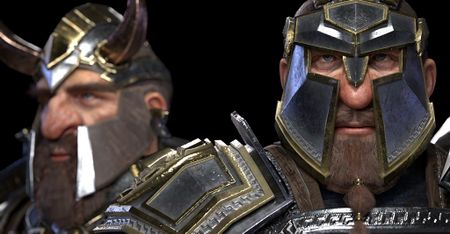 Dünir tier 5 plate armor 3D render.[1] This render does not include any special effects as a result of enchanting.[2]

This is fully modeled and completed top grade armor and this is obviously a plate set that you're seeing. This is an armor set you can achieve in game.[2] – Steven Sharif 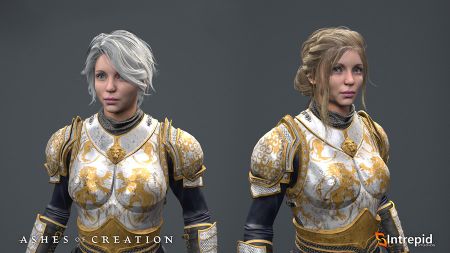 Armor characteristics are in general determined by the "type" of armor (Light, Medium, Heavy).[12]

Certain armor types are going to have certain type of predominant stat values. So there's going to be certain waterfall stats and/or certain primary attributes that are available on certain armor types; and then if you want to have the one that's not more prominently available- those will be rare to get- you'll have to elicit the services of a crafter who's very capable within that particular type of armor in order to get the non-traditional stats and/or waterfalls available. So there's still the ability to get whatever on these but they're going to be more predetermined for certain types of stats and waterfalls.[12] – Steven Sharif

There'll be certain types of set bonuses granted across specific full sets or partial sets of armor types. There will be a similar function in how damage is mitigated based on the type of armor you're wearing and how that relates to physical or magical incoming damage. So that's something to keep in mind. It's going to be situational what type of adversarial foe am I facing and what armor is the best against that to mitigate damage.[12] – Steven Sharif

You're going to have certain strengths and weaknesses of armor sets and those can be specced into by your opponents. For example, I might place some type of elemental enhancements on my weapon that horizontally changes my outgoing damage and that's going to reflect based on the opponent on my target opponent and what type of armor they have available to them to counter that.[12] – Steven Sharif

We're playing a little bit with the idea of these universal skill sets, such as dodge, parry, block, active blocking, stuff like that; and progression within those areas. There is something to be said I think for incorporating itemization choice as part of that system as well; and how it might affect that system. That's something that I think is going to be coming up in the pitch phase here shortly from design as we implement those universal skills. So you can look out in the future for more information on that.[12] – Steven Sharif 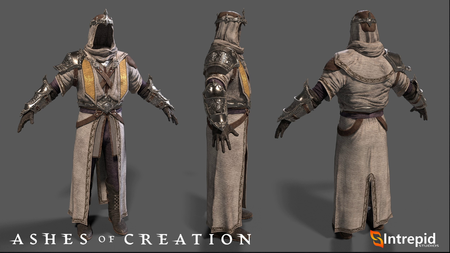 This set is a level 20 set and this is not cosmetic. This is an in-game achievable armor set I believe.[15] – Steven Sharif 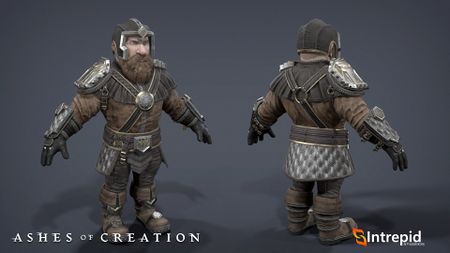 Leather gives you a blend between both worlds. It also will have different types of set benefits that aren't purely related to damage mitigation. So that could be outgoing skill damage, it could be critical chances, it could be some other waterfall stats that are associated with it. Our armors don't just boil down to damage type mitigation.[11] – Steven Sharif 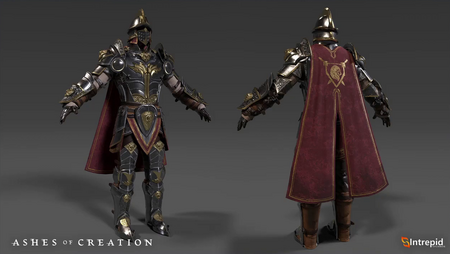 Heavy armor is predominantly plate metal, but may incorporate other influences, such as leather.[22]

Weapons and armor are not class locked, but certain classes are more efficient with certain types of weapons or armor.[24][25] Certain abilities require certain items to be equipped.[26]

Weapons are intended to be somewhat agnostic in the sense that you can find a way for a weapon to be utilized by different classes. Not just the rogue is going to be able to use daggers. Because if you restrict equipment through that, it makes the economy more difficult to have sustainability across the market of items.[27] – Steven Sharif

Violet light and myself are wearing exactly the same armor set right: Same stats, same everything, but it drops for her it looks one way, it drops for me it looks another way; and... a small part of that is gender, but then the other part of it is race. So because I was a Vaelune in that playthrough my armor was in the Vaelune style; and when she picked it up it was in the elven style because she was an elf. So that kind of gives you an example of sort of the breadth of looks that we're going for and how we kind of try to capture like who you are as as a character and kind of allow you to kind of build your look that way.[29] – Jeffrey Bard

We have essentially sets that exist across all races; and each race that dons those armor sets is going to have their own racial influence on the presentation of those particular sets. So that's something that's unique in how each of the races get diversified.[31] – Steven Sharif

Weapons and armor are not race locked, but armor will take on a racial appearance.[31][32][33]

The customization of equipment per race is really focused on Armor sets not Weapon props. Weapon props will, from a model standpoint, will translate pretty one-to-one across the races.[34] – Steven Sharif

When you say, what if I'm an Orc but want to look like an Elf and I want my Eagle set to be the Elf representation? Well the issue becomes there that you know Orcs have a different organic model. You know, their body is different than that of the Elf. So, from a scope-creep standpoint, it's one thing to add different influences that represent the cultures that are donning the armor; it's another thing to adapt each influence as a matrix that can be worn pretty much by everything. From a scope perspective, that's a very difficult task for the character artists to kind of tackle. So instead what we've done is, in order to facilitate a variety of cultural representation between the races but allow for the sharing of assets like different armor sets, we give different representations of those armor sets to each race.[35] – Steven Sharif

We want to be realistic with the application of particular types of armor, such as plate armor. In this regard for the different sexes there's a fine line that has to be drawn between accentuating the form of the sex as well as making it somewhat realistic and actually applicable to the environment.[36] – Steven Sharif

Gear is intended to be realistic in appearance.[37][38]

Armor will take on a racial appearance.[34]

Each race is getting its custom geo pieces, which then will share thematic components such as color palette, attachments, design filigree. Those types of things will get shared across the geo but generally you're going to see unique races with unique geo.[41] – Steven Sharif

Helmet display can be toggled on and off.[3]

Particle effects are used to denote the importance and rarity of some weapons.[46]

Weapons are able to be sheathed.[47]

Crafters are able to influence what their crafted items will look like.[48][49]

Gear will have appearance slots (Transmutation/Transmog/cosmetic slots) that are used to copy the appearance of an item (in some cases).[50][51] 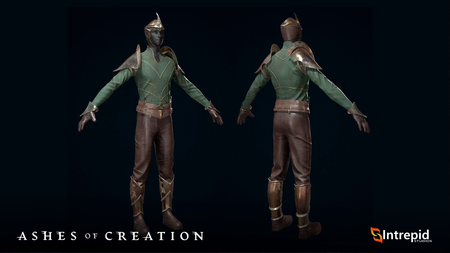 We're going relatively traditional in the gear access points by being driven by level tier that players will have access to. So as you advance in your adventuring class you will begin to unlock the ability to equip gear of a higher level.[57] – Steven Sharif

Mana-forged armor sets may be achievable in the Ashes of Creation MMO.[65]

Verra will be filled with many sets of armor, each set uniquely carved into the history of the world. Mana-forged sets are distinctly vibrant with luminescent magic, pulsating across the body of its hero. We hope you enjoy them, and look forward to many more glimpses into the armors of Verra, waiting for their champions![67] – Margaret Krohn

The Iron Lion is a fairly new order, one formed out of a desire to control the unknowable. With the rediscovery of the old world, many Kaelar wondered what lay beyond, considering the incredible power the divine gateways represented. To this end, the Iron Lion focuses not only on martial combat, but also on the art of dampening magic. Without such knowledge, establishing a foothold may be all but impossible - rampant magic is an unpredictable, and many times lethal, complication in any sortie. Due to this, the Iron Lion puts forth significant effort in studying and learning about the magics they come across, hoping to minimize the dangers they pose.[68]

There is a small RNG chance of looting rare and legendary items or crafting materials from mobs based on the level, status and type of mob. This also applies to harvesting resources with a gathering profession.[69]

At each stage from Gatherer to Processor to Crafter you are required to have certain prerequisites before those elite types of materials can be essentially gathered, processed, or crafted.[71] – Steven Sharif

The amount of effort needed and interdependencies across the different types of players – between raiders and PvPers and crafters and even role players and the taverns and businesses: the processors and gatherers – all of those systems will likely have a component that lends toward creating or crafting that legendary item... We want to stay away from the highly RNGd system, and instead take our multiple progression paths that we are offering the players and put the construction components for achieving these legendary items within them so it encourages communities to work together because it's going to be difficult for just one person by themselves to gather everything. Not to say that they couldn't in an economic sense, by buying those components, that's possible. But achieving them from a time investment standpoint we want it to be considerably less RNG focussed.[72] – Steven Sharif

Certain legendary items may be limited to one per server at any given time.[75][76]

There are absolutely legendary items and they're not items that are attained easily nor are they granted out in a volume. There might even be items that are single items that will exist on the server at any given time.[76]

A legendary weapon is easily distinguished by its visual appearance.[72]

It will be a very ornate and detailed weapon, more so than any other weapon or piece of equipment in the game. It will also include some awesome looking effects that won't too gaudy, you know they won't be too bright and shiny so that it doesn't look good, but they will be subtle and people will notice it and know wow that guy has this weapon.[72] – Steven Sharif

Legendary items are not intended to be temporary.[77]

The fact there is only one of them... or very very few of them depending on what it is. I think that in and of itself is a balance component right and you need to make sure that the players who are striving for those legendary things and who are devoting the time energy, resources in order to achieve them are accurately rewarded... We do not intend on having legendary items that are temporary.[77] – Steven Sharif

Discovery of legendary items will unlock further chapters of the Lore.[79]