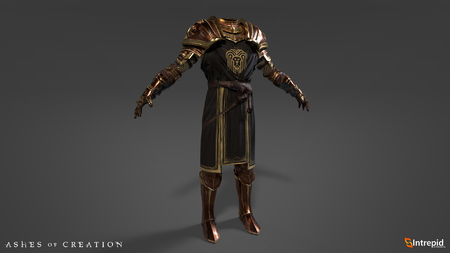 Dawnclaw Ward from the Regalia of the Iron Lion armor set.[1]

Dawnclaw Ward is part of the Regalia of the Iron Lion armor set.[1]

Rising up the ranks within the order is purely an act of determination and talent. No bureaucracy bars progress here, and as such, only the Kaelar's elite Knights rise to become Lions. Each a veteran of countless conflicts, they serve as the unshakeable bedrock of the order's forces. Their experience in leading and fighting are invaluable, and they all stand as an example of the latent potential that each Kaelar holds.[1]

The Iron Lion is a fairly new order, one formed out of a desire to control the unknowable. With the rediscovery of the old world, many Kaelar wondered what lay beyond, considering the incredible power the divine gateways represented. To this end, the Iron Lion focuses not only on martial combat, but also on the art of dampening magic. Without such knowledge, establishing a foothold may be all but impossible - rampant magic is an unpredictable, and many times lethal, complication in any sortie. Due to this, the Iron Lion puts forth significant effort in studying and learning about the magics they come across, hoping to minimize the dangers they pose.[1]