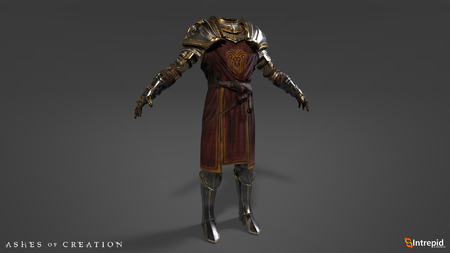 Aegis of Fangs from the Regalia of the Iron Lion armor set.[1]

Aegis of Fangs is part of the Regalia of the Iron Lion armor set.[1]

At times, an aspiring Footman will show great skill in combat, or will have developed a special affinity for negating magic. These warriors are elevated to the rank of Knight, and are often tasked with leading detachments of Footmen in the field. The Knights are responsible for charting out the Kaelar's strategy for expanding their territory in the old world, as well as aiding in the training of new recruits.[1]

The Iron Lion is a fairly new order, one formed out of a desire to control the unknowable. With the rediscovery of the old world, many Kaelar wondered what lay beyond, considering the incredible power the divine gateways represented. To this end, the Iron Lion focuses not only on martial combat, but also on the art of dampening magic. Without such knowledge, establishing a foothold may be all but impossible - rampant magic is an unpredictable, and many times lethal, complication in any sortie. Due to this, the Iron Lion puts forth significant effort in studying and learning about the magics they come across, hoping to minimize the dangers they pose.[1]