The metropolis is the pinnacle of civilization in Ashes of Creation: A symbol of the power and ingenuity of the People. It is wilderness conquered, mastered, and remade in their own image.[1] 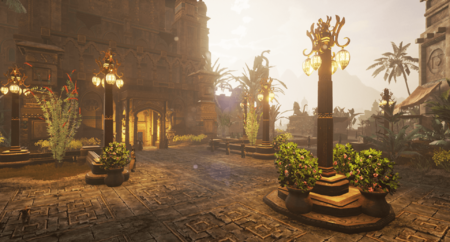 A metropolis is the sixth stage of node advancement.[1]

The final form of the Development Area is the Metropolis. At this stage of development, the Node is massive. This Metropolis will act as the central hub for all things in its region. Every organization and religion in the world will be represented within the city limits. Exchanges and markets will connect the world, while mansions and businesses will thrive within the Metropolis’ walls. The Metropolis will house a unique and powerful ability called a Superpower that is determined by its Node Type - Military, Economic, Divine or Scientific; we’ll share more details on each of those Node Types in future entries in this series.[4] – Margaret Krohn

Nodes advance by collecting experience from the actions of players nearby. As players complete content inside of a Node’s Zone of Influence (the area around the node), they contribute that experience toward the Node’s development. The experience given to the Node may then be modified based on certain Events and Accomplishments. When a Node reaches the experience required, it undergoes the process of advancing to the next stage. There are a few exceptions where a Node cannot advance even though it has the required experience - most commonly, a Node can not advance if a Node is a Vassal of another Node and would advance to the same stage as its Parent Node.[4] – Margaret Krohn

Citizen and non-citizen player activity (questing, gathering, raiding, etc.) within a node's ZOI counts toward that particular node’s advancement (progression).[5] Nodes have seven (7) stages of advancement, with experience thresholds for each stage. When a Node reaches the experience required for its current stage, it advances to the next stage.[6]

Different people have different resources invested in nodes progressing and it would be a little "gamey" if you could know exactly what was necessary at that point because that would disincentivize people from participating.[13] – Steven Sharif

Nodes greater than stage 3 (Village) enslave nearby nodes, converting them into vassal nodes.[6]

The layout and architecture within a Node’s development area are determined by influential race. For example, a stage 3 Node with the majority of player contribution being Py’rai would have a Py’rai village with Py’rai architecture. Most NPCs would be Py’rai elves, and offer questlines within the Py’rai narrative.[6] – Margaret Krohn

Each player’s contributed experience is flagged with their character race and other identifiers. When a Node advances, the race with the highest experience contribution determines the Node’s style and culture. This style and culture change can happen at every Node Stage. For example, if a Node advances to Level 2 - Encampment Stage and 51% of all experience was earned by Ren’Kai players, the Node will be a Level 2 Ren’Kai Node. If that same Node advances to a Level 3 - Village Stage Node, but the Py’Rai contributed 62% of all the experience earned, then the Node will be a Level 3 Py’Rai Node. Cultural influences bring more than just the aesthetic and storyline changes - benefits are granted to the dominant culture within that Node’s Zone of Influence.[4] – Margaret Krohn

Node layout and style is determined by several factors:[15]

There is an attrition mechanic that affects experience and influence to curb a single race from dominating the entire world.[19]

There is an attrition and that attrition on experience and influence is heightened based on the performance of the race in the world. So if all these nodes are Orc nodes then their attrition rate is very high to compete with the cultural establishment of new nodes because they have more influence in the world and a popular opinion is against them in their outlying regions that they do not have influence in.[19] – Steven Sharif

Players buy the deeds for housing from the node itself.[21] Players can also buy and sell properties from other players.[1]

This will allow players to transfer real property goods. This includes freeholds, this includes static housing, this includes apartments that they may own; and they can sell those because those will have a limited and finite quantity.[23] – Steven Sharif

Rental and leasing concepts are currently under consideration.[23]

Some concepts that we have is going to be rental or leases that could be had allowing players to kind of lease a property for a period of time where they will have control rights over utilizing storage based on the area, controlling the furniture or access point; all that kind of stuff.[23] – Steven Sharif

Caravans facilitate the transfer of goods for players wishing to turn a profit.[26]
Mayoral Caravan system - Work in Progress.[27]

The caravan system is an open world PvP system that revolves around opportunity and risk. Caravans facilitate the transfer of goods for players wishing to turn a profit.[26]

You could be more precision oriented in the decision to attack a city. Let's it's a rival node that's trying to reach you know a node stage five or something and you want to disable their ability for the religious system to progress so you target the temple during the attack, or you want to disable their scholars academy from reaching a higher level so that your nodes can; or you want to disable multiple buildings that allow for experience and quests to be undertaken by its citizenship, which prevents them from keeping up in pace of experience gained with your node. These can be more precision oriented and don't have to effectualize an actual takeover of the node.[33] – Steven Sharif

Sieging nodes will not be an easy task for the attackers. Cities and metropolises will have a considerable defensive advantage.[5]

If you own a home in a node and you don't want to see that home destroyed, you need to defend that city![35] – Steven Sharif

Trophy park is an area within Town, City or Metropolis nodes that has available spots for trophies. These trophies show the character names of players who are the first to complete world bosses and dungeon bosses that were spawned as the result of the development of that particular node.[36]

Elite monster coin events occur for nodes that exist between the Village and Metropolis stages. This level of event would include something along the lines of a dungeon level bosses and mobs coming into the world to pillage and destroy specific centers of activity.[37]

Epic monster coin events are of truly fitting proportions. These events occur randomly in the world as well as in realms where nodes have advanced to the City and Metropolis stages of development. This would be a legendary boss awoken from their long and deep slumber: A mighty dragon perhaps, whose sole purpose is to plunder to punish those who have summoned his malice and hate.[37]