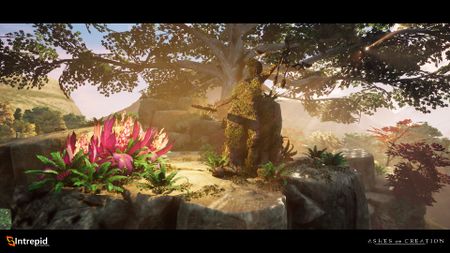 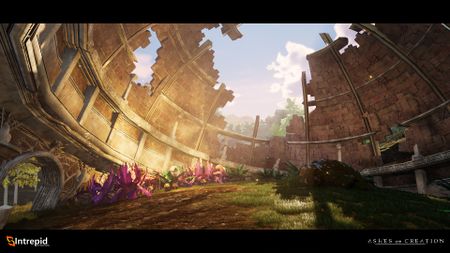 Players will be rewarded for exploring.[1]

We want to put things in the world that are dynamic; so there are reasons to keep going out and keep exploring.[2]

It will be easy to get lost in Ashes of Creation.[3]

It'll be easy for you to get lost in AoC. That is our goal from an exploration standpoint.[3] – Steven Sharif

Landmarks are scattered throughout the world, allowing players to judge their position on the map.[4]

From a lore perspective these statues have been around for a long time; and they are representative of the civilizations that existed once on this world before.[4] – Steven Sharif

Treasure hunting is not exactly "cartography", but it does involve maps that help to pinpoint the location of hidden treasures throughout the world.[5][6][7]

There will be nodes along the coast and on islands.[9]

Island chains are part of Ashes of Creation naval content.[11][12]

New points of interest (such as dungeons and world bosses) spawn as nodes develop.[2] This content adapts to the development of the zone it is in.[13]

The world of Verra will be the same on each server, but Nodes will develop differently. Different servers will have different narratives. Things that happen on one server may not happen on another.[15]

We want as many people as possible to experience the main server Narrative. These will branch at different scales, but largely at the personal level. Where things change is at the Node level – different parts of the story will be unlocked based on where and when Nodes grow. Unlocking a part of the story in a certain way locks out progression of the story in a different way. You’ll see different antagonists, different NPCs, and different calls to action depending on what’s happening with the server at that time.[16]

It kind of redefines what the players will experience in an MMORPG to come into a wilderness that is devoid of really any structure outside of what the community creates themselves; and then what can be created can be changed, if they want to experience a storyline that's been seen on another server, but you know you're fighting a dragon because you're near a mountain and the other server's fighting a Kraken because they're near the coast and you want to fight that Kraken because of its drop table. If you want to meta it or because you just want that under your belt: to be the server first to take out that Kraken and you have yet to develop the node there, you know it's incumbent upon you to manifest that in the game.[17] – Steven Sharif

The history of each server will be tracked and visible to players.[18]

We're gonna keep track of the history of the world so that we can tell people the story up to the current day. A player who's brand new, who's come in at the six-month mark can take a look at each server, what each server has done, how each server has tackled the storyline; and they can decide for themselves what community they want to join; what version of the world that they want to take part in.[18] – Jeffrey Bard

At the Village stage, the scientific node's unique building is the Library. Players can use the Library to access information, including (but not limited to) the following:[19]

Discovery of legendary items will unlock further chapters of the Lore.[20]

There are absolutely legendary items and they're not items that are attained easily nor are they granted out in a volume. There might even be items that are single items that will exist on the server at any given time.[21]

A legendary weapon is easily distinguished by its visual appearance.[22]

It will be a very ornate and detailed weapon, more so than any other weapon or piece of equipment in the game. It will also include some awesome looking effects that won't too gaudy, you know they won't be too bright and shiny so that it doesn't look good, but they will be subtle and people will notice it and know wow that guy has this weapon.[22] – Steven Sharif

Obtaining a legendary item will not be RNG based. It will entail obtaining construction components from various progression pathways.[22]

The amount of effort needed and interdependencies across the different types of players – between raiders and PvPers and crafters and even role players and the taverns and businesses: the processors and gatherers – all of those systems will likely have a component that lends toward creating or crafting that legendary item... We want to stay away from the highly RNGd system, and instead take our multiple progression paths that we are offering the players and put the construction components for achieving these legendary items within them so it encourages communities to work together because it's going to be difficult for just one person by themselves to gather everything. Not to say that they couldn't in an economic sense, by buying those components, that's possible. But achieving them from a time investment standpoint we want it to be considerably less RNG focussed.[22] – Steven Sharif

Legendary items are not intended to be temporary.[23]

The fact there is only one of them... or very very few of them depending on what it is. I think that in and of itself is a balance component right and you need to make sure that the players who are striving for those legendary things and who are devoting the time energy, resources in order to achieve them are accurately rewarded... We do not intend on having legendary items that are temporary.[23] – Steven Sharif