I can move while swinging on this guy. I can back up then continue to attack him. Just have complete control over my character while attacking.[1] – Steven Sharif

A revamped combat system will be rolled out during and post Alpha-1 testing based on player feedback.[2][3][4]

The revamped combat system will feature split-body animations, where the character's upper body can be locked by weapon attack animations while the lower body is free to continue moving.[1][8][9]

You'll be able to move forward while swinging your weapon; and this will allow you complete control over your weapon attacks for melee.[1] – Steven Sharif

Alpha-1 testing is initially focused on core functionality rather than combat balance.[9]

Q: Based on recent feedback, what direction are you leaning towards in regards to split-body versus root-motion?
A: We are leaning towards split body.[10] – Steven Sharif

The general approach that we're kind of taking based on a lot of feedback and just good combat design in general. You know philosophy is that we want to give more agency in the hands of the player and the antithesis of that is locking the player down for really long amounts of time. The sort of concept behind that is like you could make an animation effects as glorious looking as possible but if it's taking away control of the player, none of that really matters. Especially the 100th or thousandth time you're using the spell you're tired of that happening you don't feel powerful: You feel the opposite of powerful. So we're trying to like give a lot of control back to the player while they're using these abilities so they can still control their movements, they can react simultaneously while they're taking actions; and we just want to get overall more of a fluid flow, I guess, of combat. And that's kind of the general design philosophy we're using to approach the overhaul.[6] – Tradd Thompson

Skills with the greatest power may require the caster to remain stationary while channeling them. This is a risk vs. reward mechanic.[11][12]

I think that that generally we want to tend to be more mobile in our classes. I think that it's a fundamentally old-school philosophy to have a lot of stuck in place type skills. That isn't to say we won't have skills that have mobility restriction on them- that require you to channel or require a casting time where you can't move; but I think it's a blend between the two. It's neither extreme.[11] – Steven Sharif

It'll be something that you can spec around to. Again it's gonna be a risk/reward thing. We put a lot of thought into what skills are overpowered or have kind of this overpowering nature to them and those are the kinds of skills that will generally find that will be like in-place type of skills; where you are now at risk if you are going to cast this spell, but there's a big reward if you do manage to get it off.[11] – Jeffrey Bard

The revamped combat system will feature split-body animations, where the character's upper body can be locked by weapon attack animations while the lower body is free to continue moving.[1][8][9]

Player combat in Ashes of Creation is both vast and intimate. It spans many aspects of the game itself. From great political battles held on the fields of massive castles, to open world conflicts fought for the pride of Guild Leaders. A player can choose to participate in the fate of the world by swaying the tide of battle with his or her combat prowess. Our PvP mechanics follow a flagging system, as well as static PvP zones at certain points of interest; fight for control over cities, castles, caravans, or hunting grounds. Our PvP is designed to offer the players a well-balanced and fair world to shape through the pen, or sword should they choose.[25]

PvP (Player versus player combat) is the catalyst for change in Ashes of Creation.[26] Player combat is intended to be meaningful, ranging from Caravan battles to vast open world conflicts fought for the pride of Kings and Queens.[27]

Because players are motivated by different things, because they want something from the game that other players don't want, that's going to cause people to butt heads. Different players are going to want different experiences and the conflict between the two of them will create a bigger and better thing. Out of strife comes rebirth and that's a core symbol, it's a core theme that occurs throughout the game.[28] – Jeffrey Bard

There are many reasons to engage in open world PvP in Ashes of Creation.[29]

Death penalties do not apply to objective-based events (such as caravans, guild wars, and node sieges).[30] 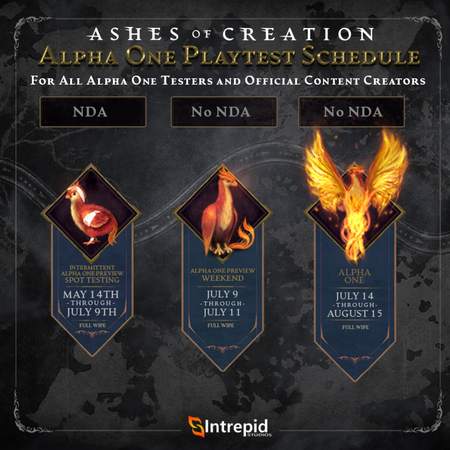 Hail and well met glorious Ashes of Creation testers. My name is Sean Farrens. I am the manager of quality assurance on Ashes of Creation and on behalf of the Ashes QA team I would like to extend a deep and heartfelt thank you to everyone who participated in testing Ashes of Creation during the weekend of May 14 through May 16th for our Alpha 1 build. In spite of instability and uncertainty you have all proven to be invaluable in regards to your feedback and bug reports; and for that I cannot express my gratitude enough. As many of you know, developing an MMORPG is an epic endeavor that is filled with trials and tribulations that no other kind of game will ever encounter; and your illustrated dedication has proven to our team that we are on a high road to the best MMORPG gaming experience to date. During this most recent testing period we received over 2,600 bug reports, which have been an absolute boon to our testing process. We review each report individually and I continue to be impressed with how detailed and helpful each of these reports has been. Like seriously you guys give repro steps and everything. Super duper handy. I greatly look forward to your feedback in the future and hope you enjoy our content so far, so thank you so much everybody.[31] – Sean Farrens

While we will have specific spot tests for certain systems as we develop them post the Alpha one month, it should be expected and understood that after this Alpha one month there will be probably a significant amount of downtime where there won't be spot testing as we kind of break apart a lot of systems, take what we learned from alpha one month and implement and iterate upon those learnings. So there's gonna be several months probably worth of significant downtime where there will not be access to spot testing, where we are going to go in and really rejigger a lot of systems[32] – Steven Sharif

The term "alpha" is a tricky one, and it typically has 2 meanings in gaming. The development meaning for alpha is a point in the process where we are ready to test the fundamental systems in their core form, without polish and without much of the content. Then, there is the external or "marketing" term for alpha. This is typically applied to Eastern-ported MMORPGs, when in fact that is a completed game being localized for a region, and not really indicative of a true development alpha. As you may know by now, game development has many stages - from the initial tech demos to the pre-production and pre-alpha states, then on to the alphas and betas and eventually launch.[39] – Steven Sharif

I want to make emphatically clear, our alphas and betas are true development alphas and betas, and some have said I am crazy to allow these phases to be seen without an NDA…maybe I am crazy? lol… But I am trusting the community of gamers out there to get a glimpse into the process, and understand the long road ahead for what will eventually be worth the wait. Given time and talent, amazing things can happen, so make sure you help us in communicating that we are in open development which means people get to see the bare bones before the meat. And look, I know people see our 4K footage and say, "This looks better than most released games!", but trust me when I say, you ain't seen nothin’ yet.[39] – Steven Sharif

The above is not a comprehensive list of everything being tested in Alpha One, but it hits the primary points. There are many other data metrics being collected for our approach to the content production pipelines, system definitions, and refactoring as well. Not to mention a plethora of technical art implications and optimizations, but you get the gist. This is a very fundamental test that will impact the direction of development post-Alpha One, so you can understand the importance of testing and its need for player participation, attention, and feedback.[42] – Steven Sharif