It wouldn’t be a castle siege without siege weapons. These are massive machines of war that enable attackers to bring down the walls, and defenders to keep their keep safe. Crafters can bring their own powerful schematics to the battlefield, or you can order baseline siege weapons from your friendly neighborhood siege master NPC. The Castle’s defenders will be able to deploy their own defensive weapons and turrets based on how well they maintained and defended their own Nodes. The sky will be illuminated with fire and fury.[2]

Siege weapons are able to be crafted or purchased from NPCs.[4]

Part of this endeavor of sieging a player-held location (or non-player-held location) is time to prepare; and that includes gathering and crafting these mega weapons or collecting the resources: Whether it be gold or specific quest items to purchase from NPCs.[4] – Steven Sharif

Anything that you want to bring into existence in the world is going to be built by players: Whether that is Ships, Siege engines, Weapons, Armor, etc.[6] – Jeffrey Bard

There will be ways to repair destructible structures (such as walls and gates) and also repair (or re-craft) siege weapons that were damaged during sieges.[7]

A summoning sheet is used to summon siege equipment to the player's position.[5]

Gunpowder (black powder) weapons will not be present in Ashes of Creation.[8][9]

I previously said there was not going to be gunpowder in Ashes. What there will be is something very similar to gunpowder but has a more arcane nature to it. It's not necessarily going to be explainable through the conventional means of chemistry, metallurgy, and physics and what not, but rather the Essence is the core component of many types of magic, one of which is obviously going to be evocation type magic; and that evocation can have some explosive tendencies.[8] – Steven Sharif

Weaponry such as Potion launchers, Siege weapons and weapons used in Naval combat are based on the arcane arts.[8][10]

As we said in the past, were not really about that black powder life. Instead it's really going to be focused on the arcane arts: The elements; the use of radiance and darkness; and then those being employed in larger weaponry, such as the type of siege weaponry between ship battles as well as those and sieges. A potion launcher is an example of the arcane energies that can be mastered in order to facilitate these highly destructive alchemical blends that can be created.[10] – Steven Sharif

Objective-based events such as Node sieges, Castle sieges, Guild wars, and Node wars will occur within a prime-time window somewhere between 3PM and 9PM server time. This is subject to testing.[11][12][13]

Non-registered combatants are not permitted on the siege field in castle or node sieges.[14]

Lower level characters will have usefulness in mass combat that does not depend on their level, such as manning siege weapons, helping repair fortifications, bringing proximity-based buffs to key positions, using stealth or scaling walls. These types of things are relevant to the tide of battle and do not require the player to be max-level or have high combat stats.[22]

A siege occurs over several phases.[23]

Summoners can collaborate to summon larger summons, such as Golems.[26]

It doesn't have to be just summoners, but it has to be a party led by a summoner with other summoners in it.[28] – Steven Sharif 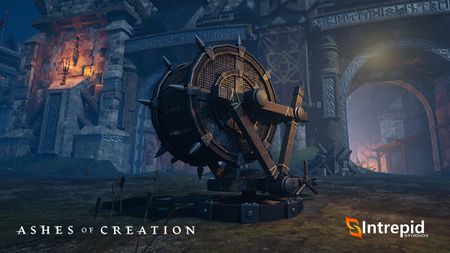 As a thank you, we wanted to share a little sneak peek of one of the siege weapons awaiting the players in our upcoming Castle Sieges Mode![29]

With regards to alpha one phase one however in the castle siege system... what will happen is static siege equipment that's placed in the map for the attackers to utilize that will present at focal points of PvP in the match where defenders will know where to target a specific area on the field in order to attack. [5] – Steven Sharif 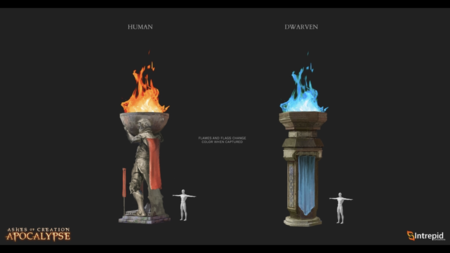 Ashes of Creation Apocalypse castle siege objective torch. The bowl fills with flames colored to match the team that captures the objective.[34]

Ashes of Creation Apocalypse castle sieges will be objective-based.[36]

A player elects to be either an attacker or defender.[31][32]

Players select one of the six classes prior to battle.[31]

There will be a timeframe for preparation where attackers and defenders take positions and prepare weaponry.[31]

In the first phase of battle the attackers attempt to penetrate the walls and gates to gain access to the inside of the castle.[31][38]

There will be a variety of siege weapons available to the Attacking side including Trebuchets and Battering Rams. Trebuchets’ range will be long enough to reach the enemy ballistas from their initial placement points. These placement points will be out of player character’s weapon range from the castle walls, but within ballista range, and scattered on the battlefield.[32] – Margaret Krohn

Once inside the castle, the attackers need to hold objectives.[31]

The ultimate objective of the attackers is to reach the center keep of the castle to channel on the final relic that's present in order to achieve victory.[38]

The defenders are attempting to hold out as long as possible, but they can also rush the field to the enemy encampment or headquarters to attempt to damage their ability to siege.[38]

If a Defender captures an Attacker’s Control Point, the total match time decreases, the Attacker Teams’ respawn time increases, and it also provides a temporary morale buff to the entire Defender’s side. Defenders will also be able to teleport to any Control Points that have been taken.[32] – Margaret Krohn

Siege weapons available to the defending side include Ballistas and Traps.[32]

Ballistas will have fixed positions on castle towers. Traps will be placeable items that the Defending Team can use to damage and crowd control their enemies. Note that these items are destructible by the Attacking Team.[32] – Margaret Krohn