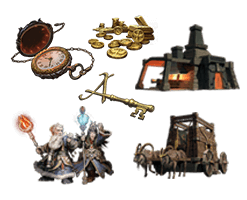 The Intrepid pre-order pack was available from the Cosmetic store.[1]

Alpha-1 sales will resume in May 2021.[3] Pre-order pack upgrades will be possible for current pack holders.[4][5]

We did have our second preview test that was last weekend, and we did hit some snags. That's okay that's a good thing in my opinion and right now this week we have spent the majority of this week- countless hours deep diving into those snags and deploying fixes for them. We will likely be having some additional spot testing with our NDA alpha 1 testers probably starting early next week I'm going to imagine, in order to address some of those issues. As a result I know that I had mentioned I would give an update on the reopening of alpha one sales: At this moment in time I cannot commit to reopening alpha one sales. So we're gonna wait to see if we can get over those issues in a relatively short period of time and then I will come back and give you guys an update on that front- mainly to speak a little bit about you know what we experienced. You know we are obviously trying to push as much as possible getting higher concurrencies on the servers and with that you know we do some changes on the networking side in order to facilitate those those goals and it's a step-by-step process where you know we make changes, we collect data, we analyze the data, we deploy fixes, we make additional changes. This is what the iteration process looks like at least from a technical perspective and how we want to accommodate what our overarching architecture goals are.[7] – Steven Sharif

I said I was going to be considering opening up Alpha One sales again once if we hit a certain level of achievement that I was waiting for. It is looking very good that that's going to be the case here. Over the next month we're going to evaluate internally but with the testing that was done over the past couple of weeks I am very, very happy to see where we've gotten to overcome those February obstacles; and we'll be considering opening alpha one sales again.[10] – Steven Sharif

I know that for the past several months we have received a considerable number of requests with regards to opening Alpha One sales again. Well, I am happy to announce that we will be reintroducing Alpha One options sometime in May. More information on this will be posted to our website around the end of April and we will announce this across our socials, so make sure to keep an eye out if you are interested in participating. I do, however, want to give a stern warning - participating in our Alpha One test should not be regarded as playing a game. You are helping to test our work in progress. You will be expected to provide feedback to help us iterate on systems and designs. We love and appreciate our testers and the support they provide Ashes, and each and every one of our Alpha One testers will have a special place in Ashes’ history. So, if you plan to participate, take the commitment seriously and know you have our respect and appreciation. This will not be everyone’s cup of tea.[3] – Steven Sharif

From the Undergrowth pre-order packs.[11]

A bright and fantastical place populated by winding stems and luminescent spores, the mushroom forests are as lethal as they are beautiful. Sentient fungi plod around the landscape, often indistinguishable from their inanimate compatriots until after it is too late. Despite the danger, some thrive in this blighted place, nearly becoming one with the land itself.[11]

Pre-order packs are available from the Cosmetic store.[12]

We offer cosmetics for players who wish to support the project early. The exclusive nature of the limited availability is something I think collectors value. If you buy cosmetics as an MMO player, I know I enjoyed if the cosmetic is rare and not every girl at the party is wearing the same dress. In addition, these cosmetics are used to populate the world through NPC variants and color/texture changes so their offering aligns with our production schedule. The good thing about these packs is they contain no P2W advantages and there is no box cost, so from a mechanics standpoint you do not need to buy them to excel in the game on launch. And also, there are comparable and subjectively more grand cosmetics achievable in game as well.[13] – Steven Sharif

Pre-order pack cosmetic skins cycle monthly and are never available again for purchase. Apart from the cosmetic skins, the packages can also include subscription time, embers (virtual currency for future cosmetics when the game is live), access to alphas and betas, and other perks such as name reservation.[14]

These packs are completely optional and provide no vital components for succeeding in Ashes.[14] – Steven Sharif

Purchasers of pre-order packs have the ability to purchase future individual pre-order pack cosmetics (at the same or lower level as their pack purchase) as add-ons in the month that they are on sale.[2] [14][15]

Cosmetics owned prior to upgrading a pre-order pack are retained.[19]