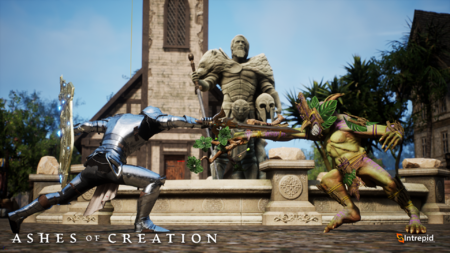 The Event system will also create a variety of PvP situations in the open world. From small skirmishes that lead into sieges to battles over capture points during a node or castle siege, PvP objectives will play a crucial role in determining the tide of battle.[1]

The majority of players will experience PvP through opt-in objective-based battlegrounds. These are high risk and high reward encounters that do not utilize the corruption system.[2][3][4]

The majority of PvP that players will encounter- the vast majority- will be through consensual systems, meaning opt-in systems like sieges, like caravans, like wars, or going out into the open sea. These are conscious decisions that players will make knowing the risk profile- assessing that- and they will opt-in to those things..[2] – Steven Sharif

We will have limited functionality where players can spectate from either ghost camera from fixed positions at certain battlefields; some of which might include castles.

Our castle system, our sieges against nodes, the caravan system, battlegrounds that exist, guild wars: We want there to be a meaning to this conflict. We want players to actually have some skin in the game when it comes to participating in PvP.[16] – Steven Sharif

As some areas in the world grow, others will fall. This is the foundation of the living, breathing world that is Ashes of Creation, where players will have the ability to make important decisions that matter in the longevity of an area becoming a city, or whether to siege a rival town. Rise above the ashes, create the world around you, and be a part of the story that unfolds because of your actions and decisions.[18] – Margaret Krohn

Node sieges enable players to destroy nodes.[18] This paves the way for new development and access to the locked content in surrounding nodes. Due to this dynamic, political strife and intrigue play an important role in the structure of the world.[19]

If you own a home in a node and you don't want to see that home destroyed, you need to defend that city![16] – Steven Sharif

Throughout Ashes of Creation, the player has an opportunity to participate in massively multiplayer siege warfare. Since castles are likely the world’s most limited resource, it will be a task to secure and hold them. Involving hundreds of players on a single battlefield, our sieges will employ many moving parts and intricate design features. Because of the difficult nature of taking and keeping a castle there are great rewards available to the players for their efforts. Castles will allow players to exert control over nearby lands and allow for the development of unique buildings in the nearby towns.[23]

Guilds participate in Castle sieges in an effort to capture and occupy one of the five guild castles in Ashes of Creation.[24]

A guild that captures a castle will own that castle for a month before it is sieged again.[32][33]

Each week leading up to the siege week... is a week that's dedicated to one of the three castle dedicated nodes. So around the castle there are three nodes. They represent week, one, two, and three; and then the fourth week is the siege against the castle. Those can only be elevated up to stage three. We've discussed this in the past and there's definitely information out there on the community ran wiki.[32] – Steven Sharif

There will be benefits to attracting people... even if they're not in your guild or alliance – kind of a feudal like system, where you can attract other players who are just independent of this whole politic. They will have things to do there - benefits to receive - and there will be a reciprocal relationship between who you can attract, what they do for you; and how that benefits you and them.[33] – Steven Sharif

You won't be able to see inside specifically but as part of the caravan structure itself there will be little hints as to what the the cargo is. So for example if you've seen some of our recent footage with caravans you kind of see sitting on top of the caravan there's some gold or some silver or some iron.[38] – Steven Sharif

It's still intended from a design standpoint to be a window that is presented to the player based on proximity; and that proximity it can be greater depending on your performance as either a defender or an attacker in previous raids.[40] – Steven Sharif

There will be incentives and risks for both caravan attackers and defenders.[12][13] These will be tested and refined during the alpha and beta testing phases.[47]

There is a level of risk that comes with the attacker. We have progression paths that exist for bandits and that exists for defenders; and if you choose to opt into a caravan attack- you sign up for that attack and you fail that attack- it is detrimental to your path of progression down the bandit area. That's one thing: Two is of course you have gear decay. You have degradation that can be suffered if you die. That is a cost. And then you also have a reputation; and if your reputation precedes you when you want to transit goods across the world; and you see somebody who's doing it and you want to participate as a defender or a participant, they might say hey screw you, you were just murdering my people last week and I saw that you're like on the top of the bandit list for killing caravans. So it has repercussions in the sense that it locks you out of certain player groups. It provides decay to your armor. It has deleterious effects on your progression, and the attacking- and the bandit progression of caravan attacks or defense.[12] – Steven Sharif

The caravan defender role is going to have its own progression questing and rewards associated with it that are going to attract a certain subset of players and then you know vice-versa wise we're going to have incentives that appeal to the more highway brigand type players; and you know you might not always be on one side or the other: that might change depending on what your interests are in the at the time. But obviously you know those types of systems need to have robust you know consequential type rewards and benefits associated with them in order to compel the player; and that's something obviously we're going to test in alphas and betas and see how performant it is in actually attracting players to participate and make sure it's not just one-sided so-to-speak.[47] – Steven Sharif

Operators of a ship's weapons platform can initiate naval PvP against another ship in the following three cases.[11]

Another important change that has occurred is the open seas is now an automatic flagged location. So when you move off of land we have a flagging system that protects and the open seas are international waters where you need to be careful; and there is a lot of opportunity at Sea; and because there's a lot of opportunity that's unique to that content- that's unique to that sea: that's treasure finding; that's NPCs; that's a lot of different stuff there needs to be risk associated with opportunity.[10] – Steven Sharif

We have a very intuitive UI that that as you approach the border between open sea and coastal area you are notified of that. You are warned ahead of time. There's a countdown when approaching. We interpolate the distance travel and speed you're moving and you get to see "I'm entering open waters"; and when you do you have this big trophy call out on screen that says "You have entered the open sea. Territory fraught."[49] – Steven Sharif

Guild war features are currently still in the design stage, but the overall goal is for guild wars to be objective-based with great risk for each side.[51]

I can't really define exactly what those features are yet because that design stage is still up in the air from a discussion standpoint. There's a lot of different ideas that relates to how those two can come into play, but I will say that in every MMO I've ever played guild wars are very binary. They're very like 'Okay you've declared, you have a number of kills to deaths and the guild war's over, thank you...' My objective to kind of change that dynamic is to include greater risk for the sides to initiate the war and also to make it more objective-based than just a binary kill death ratio; and the fortresses and guild halls come into that type of facilitating that change.[51] – Steven Sharif