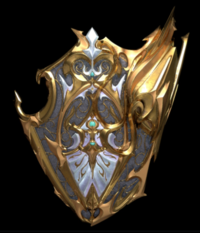 Paladin's Might is a shield in Ashes of Creation Apocalypse.[2]

This small buckler imbued with a lost paladin's soul can, with a simple command, grow into a tower shield, which will deflect any attacks that hit it.[2]

One of our designers was playing a match and he had a drop on someone and attacked them with two hits from a Halberd; and they managed just to take out their Paladin's Might and survive; and he was like "That is so OP!"[3] – Steven Sharif

The developers have yet to finalize designs for active blocking in Ashes of Creation.[4][5]

We're going to be discussing internally amongst the designers and the combat team and then we will likely share with the community once we've nailed down a few approaches and prototype them out.[4] – Steven Sharif

This is something we're still actively iterating on and actively going to be testing in our hybrid system but you know as we're as we're doing that we are taking into consideration. Obviously we want action based components to also interact in some way shape or form with the waterfall stat system as well; and you know that seems like it might be an oxymoron from an action to tab sense, but it doesn't have to be. There can be components of action- so say for instance you could have a dual component where you activate that shield stance and if you accurately intercept an incoming projectile or a skill that's been initiated from the forward arc, you get 80% damage mitigation or 80% application of the physical defense of the shield; and if it comes from an area outside of that forward arc then you get a lesser bonus; and that essentially what would happen is let's say you take into account the stat of the shield's physical defense value, you apply it as a mitigating factor to the incoming damage, but in addition you augment that system with the waterfall stat that is responsible for shield damage mitigation or shield rate; and maybe you know the default skill says 80% damage mitigation from forward arc but that gets augmented up to 87% because of your stat essentially; and if it's not in your forward arc then it gets you know 50% efficacy- maybe it's 40 something percent. So just to give you kind of insight into what goes into kind of determining these skills and how they interact on an action-based front.[5] – Steven Sharif

In APOC when we had the active shield stance- that was an active shield block action-based system; and when we collected design data on essentially the efficacy and essentially the accuracy of players who used that wasn't very high; and there is a concern at least on the front of implementing a action restricted type active shield block as opposed to what would traditionally be along the lines of activating a buff that grants a shield block rate adjustment and is universal on incoming damage- and interfaces with the stats- is really something that we're leaning towards in incorporating for the hybrid combat system.[5] – Steven Sharif