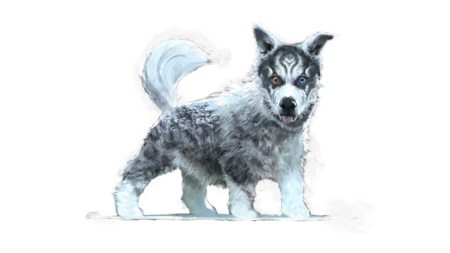 Peak Hound Pup was a pet cosmetic skin in a pre-order pack.[1]

Of the myriad exotic animals fancied by nobility, the Peak Hound is among the most sought after. They are a very hardy breed, as they tend to make the caves near the summits of mountains their home. Procuring a single pup from a litter is unimaginably dangerous, usually resulting in the mercenary barreling down a frozen wasteland with the furious mother gnashing after them. The Peak Hound's stoic personality makes it well-suited to following commands, while its combat prowess and distinctive fur pattern make owning one a sign of great status.[1]

The Cosmetic store enables players to purchase Cosmetics for use in Ashes of Creation.[3]

Skins are cosmetic items that do not grant the user any benefit.[5] Nothing in the cosmetic store will be pay to win.[6]

All cosmetic store items will be non-tradeable.[9] There will be no gifting mechanism for cosmetic items.[10]

I don't want cosmetic items that can be purchased from the marketplace to be transferable... because it is in a way a transfer of money for potentially something in-game.[10] – Steven Sharif