A big component of the MMORPG that - half of that you know acronym is RPG role-playing game. And in order to role-play you need to be able to represent kind of what your character is doing in that world and you know part of what animation is doing is creating these sockets on the let's say the belt or the back that you know can plug in certain types of props or items that are created by the character team, like Carson, you know might be a scroll tube, it might be a potion, it might be whatever: Those players will have the ability as we've discussed in the past will have the ability to select what they want to be represented in those sockets and then animation will make sure that jibe well in movement.[1] – Steven Sharif

There are different systems that allow stories to be told in Ashes of Creation.[2]

A MMO lives and breathes on its community and we don't really want to give short shrift to any one of those types. All of them are important: the RPers are important, the people who just want to hang out in the Inn and talk are important, they all add to the game and so we want to make sure that we take care of all of them... You can run a business based on RPing.[4] – Jeffrey Bard 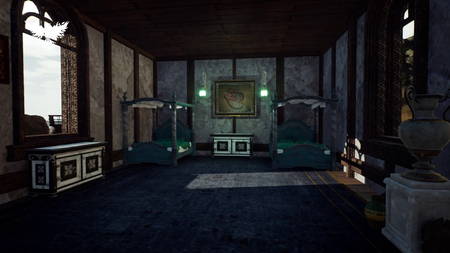 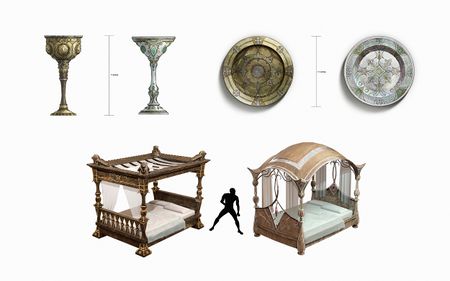 Quality furniture can be crafted in-game based on the skill of the craftsperson.[12]

Your ability to craft more luxurious furniture comes with how much of a master craftsman you've become in the furnishing profession... This isn't like you know, I want my house to look good, I got to fork over 50 bucks in cosmetics... Players can craft in-game based on their dedication and focus in that aspect the artisan tree.[12] – Steven Sharif

Ashes of Creation Apocalypse players can establish Player housing and save Furniture arrangements for use in the full game.[13][14] 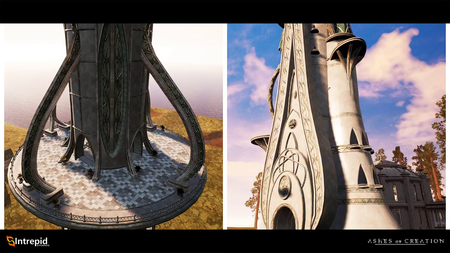 Social organizations are ways for players to interact with the world around them in a different manner. They are about creating micro communities within the game.[16]

The whole idea of these societies is that they are a mechanism for progression that do not have to rely on your level progression. These are different progression paths that players can participate in. If you don't want to leave a node in your gameplay experience and you want to find as much as you can do within that city, these offer those things. Now, some quests might take you outside of the city to you know hunt and pursue things, but you could also perfectly be a person that is a merchant and purchases them from other travelers instead of having to go do it yourself. We want to offer players a diverse method of progression; and these systems house those benefits.[17] – Steven Sharif

Social organizations function a little bit like factions, but without flagging mechanics.[18]

Sometimes two organization's goals might not align with each other and there'll be conflict there, but it's not going to be like everybody in the Traders Guild is at war with everybody in the Thieves Guild.[18] – Jeffrey Bard

Social organizations are run by NPCs, however there will be ranks that certain members can attain that will grant some influence over the organization.[19]

There are interactive social animations and emotes.[22]

Some animations will be agreed-upon emotes that you can initiate with other characters.[24]

Emoji adds additional flare either for chat or character representation.[25] Emoji packs were available in the Kickstarter and Summer crowdfunding campaigns at the Explorer level and above.[25]

There will be role-playing emoji such as dice rolling.[26]

Parlor games are games that are played in player-built taverns or in-node taverns.[27]. Some will be dice games, others will be card games; and some will be less savory.[28]

There may be a mobile application that allows players to interact with parlor games (tavern games).[31] 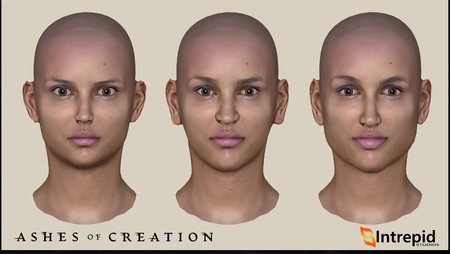 There is a great variation that's going to be available from a character standpoint when creating your character, especially around the face. Whether it be the shape of the jawline, the cheeks, the ears, the nose, the lips. You know we want to provide a lot of options and an agency to the player to customize their character appearance.[32] – Steven Sharif 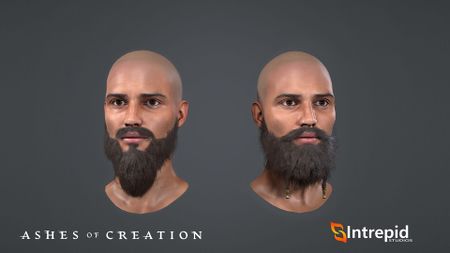 We want there to be a lot of room for people to manifest their own identity, to role play how they want to from an appearance standpoint. There's going to be parameters within which you will be able to customize a character. We want the culture and the identity of the races to exist in a range that makes them easily identifiable from other players and other cultures. So, because of that, we have to have a spectrum you can exist on. There will be a lot of hair variants you can do, body art tattoos that you can apply. You'll be able to play with the scales of the facial structure, the bones, the height, width, the body fat percentage. You'll be able to add body hair on different parts of the body. If you want to have hair on your feet, you can dial that up.[34] – Steven Sharif

Character appearance can be customized in the character creator (CC)[35] and via in-game salons/barbershops.[36]

Sliders will offer flexibility in customization.[42]

Adjustments will allow a character to appear more feminine or masculine.[45]

Character appearance is able to be saved to hard disc.[47]

The character creator (or character customization screen) allows players to define the look of their character in Ashes of Creation.[50]

We're gonna have a wide array of character customization out of the box.[25]

If I had to give a comparison, I would use BDO as an example of what our Character Creation is going for.[51]

A character's voice may be able to be selected from preset options.[52]

There is a chance that the character creator may be released before Alpha-1.[53]

A character web page (character sheet) will be available closer to live launch that shows the following:[54]

You will have a unique homepage for each character and that homepage will be able to be customized by the user to display unique information. It will have a small out-of-game RPG component where you can construct background and traits and stuff like that.[56] – Steven Sharif

The character page will be accessible in game by opening a browser through the UI.[55]

That's part of the character sheet desire for us which hopefully will be accessible in game as well by opening a browser through our UI where you can get back history of a character that that character has input themselves into journal entries that they may choose to share with others... For role play perspective we want people to be in depth with their characters.[55] – Steven Sharif

The player can manage what info is shown on the character page.[54] 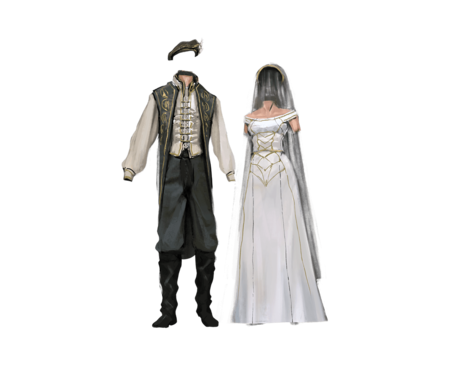 There is a marriage mechanic in Ashes of Creation, including same-sex marriages.[58]

Marriage may unlock different activities that are not available to characters who are not married.[59]

There are not plans for gender neutral neutral pronouns. However our marriage system which will be present does not take into account gender. So two individuals of any sex will be able to utilize the marriage system and we feel that that's pretty important to really reflect the nature the cultures in Ashes of Creation: That it does not have that conflict present in this fantasy world that we may have experienced in the past in our real world; and that's a good place both from a sanctuary standpoint through people who are maybe experiencing that in the real world to kind of get away from it in the fantasy world: We wanted to provide that type of outlet.[60] – Steven Sharif

Story arcs drive one or more quest lines in Ashes of Creation.[61]

The overarching narrative is that players are the returning children of Verra. They will not be characterized individually as "saviors".[63]

Every stage a node develops it's unlocking narratives, storylines, it's changing the spawn population of the area around it, changing what bosses exist, it's triggering events where you may have legendary dragons attack the city. It's basically writing the story of the server based on the actions and determination of the players. So, you may experience a dungeon one month earlier and have a completely different story that relates to this location the next month, because something has changed either geopolitically or from the node standpoint.[64] – Steven Sharif

Certain story arcs can be unlocked through the bulletin board system. Certain requirements would need to be met in order to access story arc quests.[65]