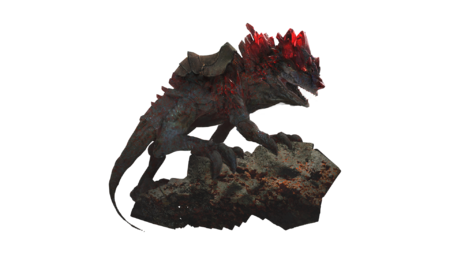 Carmine Chameleon was a cosmetic mount skin in a pre-order pack.[1]

Deep within the arid caverns of Verra lie rare deposits of incandescent ruby, shining and reflecting off each other to create a subterranean starscape. However, only the most perceptive will notice that some of the stars in this veritable night sky are moving of their own accord. Such are the abilities of the Carmine Chameleon to camouflage themselves in their natural environment. This chameleon is a large reptilian creature that evolved to cultivate the selfsame stones that mark its home. While mostly stationary, the creature can move at remarkable speeds when threatened. Needless to say, their opulent and striking appearance (as well as their agility) has caught the attention of many nobles. It is said the exorbitant price of its capture exceeds the price of the stones that adorn it.[1]

Providing these limited options that collectors out there like when it comes to achieving and/or purchasing cosmetics. It means something I think when players make that decision to purchase or they go through the rigorous portion of achieving those things in game that it is not just everywhere around them and becomes meaningless at that point.[7] – Steven Sharif

All cosmetic store items will be non-tradeable.[16] There will be no gifting mechanism for cosmetic items.[17]

I don't want cosmetic items that can be purchased from the market to be transferable... because it is in a way a transfer of money for potentially something in-game.[17] – Steven Sharif