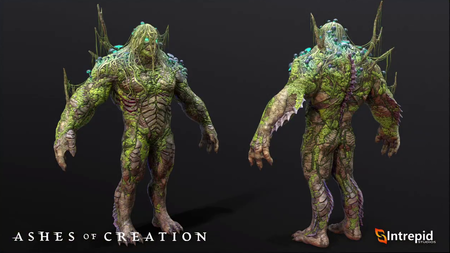 When I was designing it I was thinking about a creature that lives under the water and all you see is the top part with like little bits of seaweed almost and little mushrooms; and then you're standing on it and he just stands up, and you're like "Oh! I'm standing on top of this giant thing."[2] – Margaret Krohn 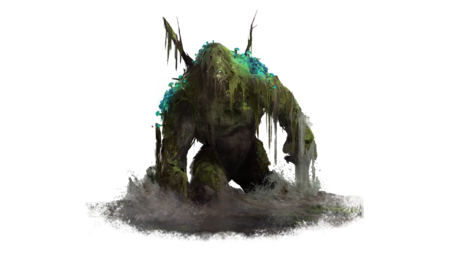 Bog Brute was a pet cosmetic skin in a pre-order pack.[3]

Nature's resentment and spite given form, these lumbering hulks of mud and moss silently wait in the undergrowth, ready to snatch those who would disturb the stagnant greenery. Some places have long been undisturbed, and wish to remain so. It is during these times that the bog brutes will emerge from the ground with a gnarled roar, charging forth and driving away intruders. Spotting them in their dormant state is nigh impossible, being formed from the same earth in which they lie.[3]

There is going to be legendary cosmetics that can be earned and achieved in the game through the game systems, but that's going to take a significant amount of effort and work; and those cosmetics are going to be on-par with the cosmetics offered in the marketplace... What that does is it provides additional revenue to the company so that we can continue to fund the development of content as well and bridge the divide that not having a box cost would have and not having any pay-to-win mechanics whatsoever.[5] – Steven Sharif

Providing these limited options that collectors out there like when it comes to achieving and/or purchasing cosmetics. It means something I think when players make that decision to purchase or they go through the rigorous portion of achieving those things in game that it is not just everywhere around them and becomes meaningless at that point.[9] – Steven Sharif

We plan to include a shop for micro transactions. The shop will only include cosmetic items. Nothing in our shop will ever be pay to win as we believe this practice greatly hurts the MMORPG genre.[8]

All cosmetic store items will be non-tradeable.[18] There will be no gifting mechanism for cosmetic items.[19]

I don't want cosmetic items that can be purchased from the market to be transferable... because it is in a way a transfer of money for potentially something in-game.[19] – Steven Sharif