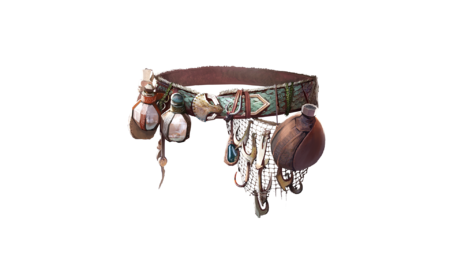 Berylscale Band was an accessory cosmetic skin in a pre-order pack.[1]

A simple, but indispensable item for many Niküa fisherman, this sturdy construct of leather and fur is reinforced by a layer of polished scales, offering the girdle great resilience to oceanic conditions. Experience has taught the Niküa that angling often requires the right tool for the occasion, and the wide variety of hooks and bait aims to ensure every outing will yield a bounty.[1]

A big component of the MMORPG that - half of that you know acronym is RPG role-playing game. And in order to role-play you need to be able to represent kind of what your character is doing in that world and you know part of what animation is doing is creating these sockets on the let's say the belt or the back that you know can plug in certain types of props or items that are created by the character team, like Carson, you know might be a scroll tube, it might be a potion, it might be whatever: Those players will have the ability as we've discussed in the past will have the ability to select what they want to be represented in those sockets and then animation will make sure that jibe well in movement.[2] – Steven Sharif

Items attached to a character's back or belt represent items they are in possession of. Players can set the appearance priority for the items they wish to show.[3][4][5] Only one item can show at a time, and that is determined by player choice.[6]

The idea is to kind of move away from the mundane kind of application of belts in previous MMOs where they don't really have a lot of character so to speak. But in reality you know as an adventurer you come with a lot of tools and things that you have to use out in the wild in order to achieve what you're trying to achieve. So we wanted to kind of represent that on your character and give you something that can actually be tangible for your character and see there. I think it adds a lot of character and flavor to your identity.[7] – Steven Sharif

We plan to include a shop for micro transactions. The shop will only include cosmetic items. Nothing in our shop will ever be pay to win as we believe this practice greatly hurts the MMORPG genre.[12]

All cosmetic store items will be non-tradeable.[20] There will be no gifting mechanism for cosmetic items.[21]

I don't want cosmetic items that can be purchased from the market to be transferable... because it is in a way a transfer of money for potentially something in-game.[21] – Steven Sharif