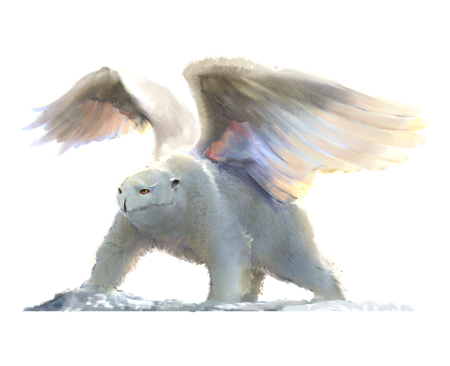 Arctic Prowler was a cosmetic gliding mount skin in a pre-order pack.[1]

This is another one of Verra's chimeric creatures. The Arctic Prowler is a terrifying foe but a surprisingly staid mount. One of the more intelligent of the animal species found on this planet, it learns commands readily and can form lasting bonds with humanoids that treat them well.[2]

The Arctic Prowler is really more closely aligned with a traditional kind of owlbear.[3] – Steven Sharif

There is going to be legendary cosmetics that can be earned and achieved in the game through the game systems, but that's going to take a significant amount of effort and work; and those cosmetics are going to be on-par with the cosmetics offered in the marketplace... What that does is it provides additional revenue to the company so that we can continue to fund the development of content as well and bridge the divide that not having a box cost would have and not having any pay-to-win mechanics whatsoever.[5] – Steven Sharif

Nothing in our shop will ever be pay to win as we believe this practice greatly hurts the MMORPG genre.[8]

I don't want cosmetic items that can be purchased from the market to be transferable... because it is in a way a transfer of money for potentially something in-game.[11] – Steven Sharif

Providing these limited options that collectors out there like when it comes to achieving and/or purchasing cosmetics. It means something I think when players make that decision to purchase or they go through the rigorous portion of achieving those things in game that it is not just everywhere around them and becomes meaningless at that point.[13] – Steven Sharif

The best skins will be in-game achievable (obviously “best” is subjective, so I’d say the most ornate and detailed/unique).[21] – Steven Sharif